Fanclubs in the spotlights – The Dutch Garrison

In the next couple weeks we will put our favourite fan clubs in the spotlight. This week’s turn is for the fan club The Dutch Garrison. In this article they will tell you everything about their fan club, what they do and a lot more!

By now almost everyone knows us; the men and women in the ‘real’ Star Wars costumes who are always at for instance Heroes Dutch Comic Con. We have been present at every edition at Heroes Dutch Comic Con, both the winter and the spring edition. This all started with two tables at the event. However, now we can say with pride that we have grown to a large stand with many selfmade props and costume parts.

Besides Heroes Dutch Comic Con you could know us from charity events or special days for children with a disability. We do this voluntarily basis for organisations such as Make-a- Wish, for the organization Opkikker and Hoogvliegers. However, we also volunteer for local charities. Here you could think about helping a baker raising money for playground for children, but also you could think about helping local sport clubs to raise money for KIKA. As a part of the internationally known organisation ‘’the 501st legion’’ ( more than 14.000 members) are we literally the ‘’the bad guys doing good’’.

This all created that we can say that we have in our organisation more than a 150 members and even more official Star Wars costumes since many of our members have multiple costumes. Where the most popular costume our imperial stormtrooper is. These costumes are private property of the members and are often self-made. 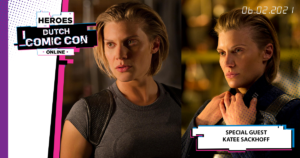 The American actress is known for her role as Captain Kara “Starbuck” “Tharce in the television series Battlestar Galactica, today she is seen on the well-known hit show The Mandalorian. 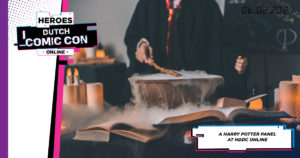 The world of Harry Potter

The eight-part fantasy series is discussed in detail by our panel powered by Bas van Teylingen, Bardo Ellens and Brainpower. They will discuss different characters, storylines and fun facts. 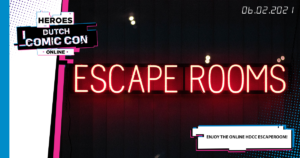 Play the one and only Heroes Dutch Comic Con escaperoom

Escapademic has designed an escape room entirely in Heroes Dutch Comic Con style especially for you. Flashy colors, moving images and intricate assignments are all present during this escape.