Is Dating for Geeks based on a true story? Read the interview with Kenny Rubenis!

Kenny Rubenis (1984) is the artist on the popular series Dating for Geeks, which is published since 2014 in the newspaper Metro and Eppo magazine. Kenny signs both days the new book “Girls & Goblins” at the Eppo booth.

Has Kenny experienced situations similar to his comics Dating for Geeks and want to know who his inspirators are? Read this and more in the interview with Kenny Rubenis.

Where can our visitors find you during Heroes Dutch Comic Con?
You’ll find me in the stand of Eppo Stripblad, which also my publisher. Several other incredible comic artists will be joining as well. For example, artists like Romano Molenaar (known from Storm) and Aimee de Jongh – who drew “Snippers” for Metro and is successful with her Graphic Novels: “De Terugkeer van de Wespendief”, “Bloesems in de Herfst” and “Taxi!”. These titles were all nominated for best comic of the year.

What will you be doing at Heroes Dutch Comic Con?
I will be drawing a lot! Make sure to bring me your comic or book and I will make a nice personal drawing in it for you! At the Cozy Corner you can also find me during the Q&A about the successful crowfunding campaign I had for Dating for Geeks.

Could you tell the visitors a bit more about the Crowd Funding campaign you created?
I started the crowdfunding campaign after I unexpectedly had to quit working at the Metro newspaper, after drawing over more than 5 years. However, to my own feeling I was far from finished with the adventures of my characters, so I wanted to continue. Fortunately, my readers helped me tremendously to move on. Enough money was raised to continue Dating for Geeks for another 2 years.

How did you come up with the idea of Dating for Geeks?
I’m a huge nerd, but I also love romantic comedies. It writes itself 🙂

Are some scenes based on true scenarios?
Some, but most of it is and remains just made up. Fortunately, otherwise I would be very sad! But often little things from my own life, or that of my friends, do find a place in the comics. Only then they are adapted and exaggerated, that it has little more to do with the true event.

Have you ever experienced something like this yourself (and would you like to share this good story with us)?
The best example is a series of comics from the third album, which shows that on the forum of the magazine Viva was a topic that was more or less about me. I’m not one of the smallest people, in fact, to state this smoothly, I’m fat, and that topic was started by a woman who fell for the somewhat heavier man. The second comment to her post was from someone who recommended me to her. Very strange to read that on the couch at home, all of a sudden.

We don’t want to spoil too much on what you’re going to talk about at the Cozy Corner, but could you give us a little sneak peak?
The storyline of Dating for Geeks just goes on and on. I do have some ideas for big plottwists, but I can’t really tell anything about that without spoiling things. But besides the regular comics, I’m also busy writing and drawing Dating for Geeks: SideQuest, a great Dungeons & Dragons adventure that the DFG characters are going to experience, and which will initially be exclusively for donors to read.

Who is your favorite comic character?
From someone else’s? I’m a big fan of Bryan Lee O’Malley’s “Scott Pilgrim” comic series, so Scott’s high on my list, too. Anyway, that series has an overload of nice characters.

Of my own? Jasper. He’s kind of the main character of the series, though everyone has more or less the same role.

If you could come up with a new superhero, what would he/she look like and what would his/her superpower be (and why)?
I’m frankly not a fan of superheroes! I often find ordinary people much more interesting. But the superpower that “my” superhero would get would undoubtedly be shapeshifting. I find that the most convenient force myself. Especially if it wasn’t limited to just other people. Turning yourself into animals or objects is of course very cool.

The upcoming show is HDCC’s 10th edition. We would like to look back at the highlights of those 10 editions. Do you also have a nice memory of a specific edition of Heroes Dutch Comic Con? Can you tell us more about it?

The first edition of HDCC remains a great memory for me, because for me it was really the moment that I noticed then many people read my comic and liked it. And it was also a revelation for my comic strip colleagues when they saw how busy I was at the time. Then there was the edition with a DeLorean from Back to the Future on the exhibition floor, and as a die hard BTTF fan, that’s always a plus.

Who used to be and/or are now your inspirators? (and why)
I used to be inspired by so many things! Dutch comics and cartoonists, like Hanco Kolk, Peter de Wit and Marc van der Holst, but also cartoon series like Dexter’s Lab, Cow & Chicken and Johnny Bravo. Nowadays I’m mainly inspired by American and English webcomic and graphic novel artists like Danielle Corsetto, Bryan Lee O’Malley, Luke Pearson and Craig Thompson. The story plays more of a role there, rather than jokes. That’s also a the direction I want to go, with projects alongside DFG.

YOU HAVE TO CHOOSE! From now on, would you rather go on a geek-date every day for a year or just make Hello Kitty comics for a year?
Then I’ll have to start dating every day! Not that I have anything against Hello Kitty comics, but I think my audience, who just finished two years of comics, would thank me if I suddenly wouldn’t write Dating for Geeks anymore. And I’m assuming that those daily dates would provide a lot of inspiration. Especially inspiration. I’m afraid that even a year of dating wouldn’t lead to a relationship. 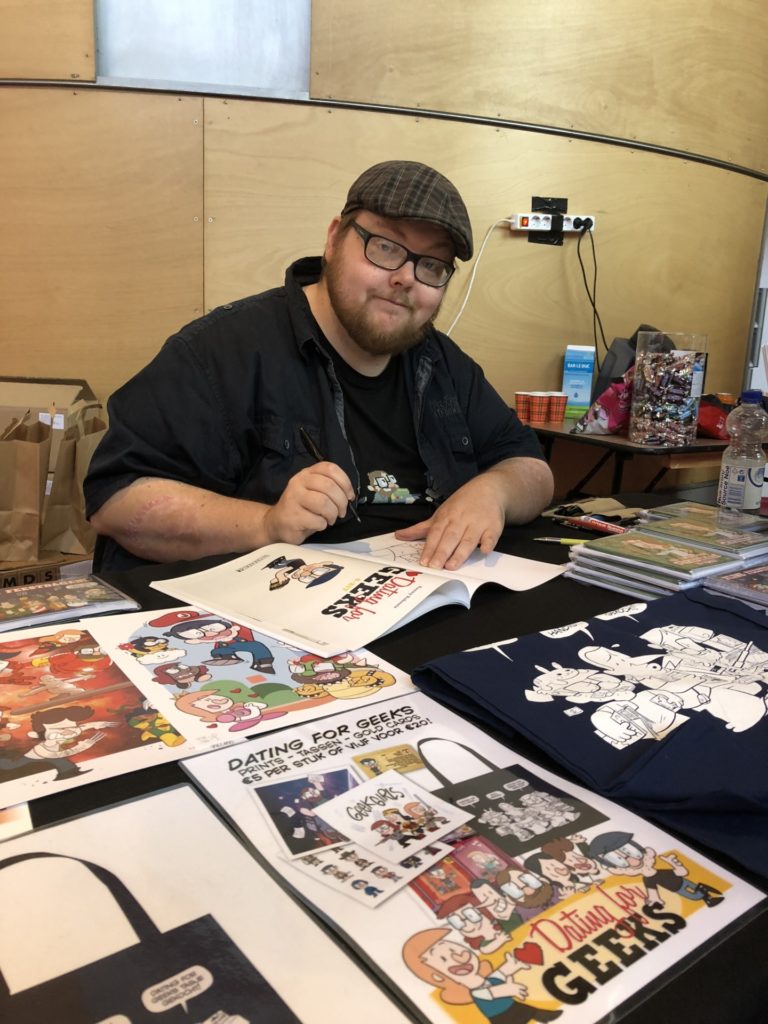